Vanuatu ... AM swimmers in paradise

Four Adelaide Masters swimmers – Jeanette Ashton, Sue Graebner, Pam Gunn and Michael Harry – made the trek to Vanuatu for two rewarding swims in June. Among a dozen or so swimmers from SA around 100 in total which made the trip including a number of local Vanuatan swimmers.

Vanuatu is a fascinating country, a spectacular tropical environment, volcanic terrain with some volcanoes which you can trek to and clear, deep blue water with abundant reefs teeming with fish.

It is the people who really make an impression – mostly extremely poor, they are universally friendly, relaxed and welcoming.

The population is young and homogenous – 95% indigenous ni-Van with a small community of French and English expats and a Chinese minority which operates most of the country’s businesses.

While there are literally hundreds of local dialects, English and Bislama – pidgin English – are widely spoken and communication is never a problem.

Everyone seems to be employed – mostly in subsistence agriculture, though there is a growing tourism sector.

Infrastructure – most obviously health, education and roads – is quite primitive but the country has a sense of purpose and well being that shines through the poverty.

Accommodation, local travel and food are reasonably priced. Food is incredibly cheap if shopping at the local markets or from the roadside.

Some of the treats are the Vanuatan beer Tusker and coffee, grown on the southern isl 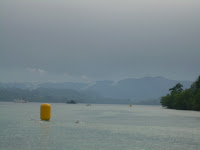 The first swim, a 3.2K course around Iririki Island at Port Vila on the main island Effate, was held in overcast but fortunately fine conditions after a wet and windy day before.

On the day the water was almost flat, clear enough to see tropical fish while swimming over reefs close to shore, and markedly cooler crossing a deep, indigo trench between the island and the mainland.

The awards dinner the following night was fun, a ni-Van string band played Vanuatan reggae and there were tarot, yams, curries and other interesting dishes as well as lots of fish.


After Port Vila we flew to Espiritu Santo, the largest of the islands about 200K north.


Lugarno, the capital, is a small, almost sleepy township, with distinct French influences and fascinating relics and infrastructure left by the US forces in World War 2. 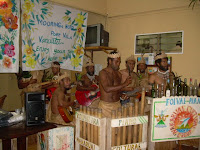 The day after we arrived we were taken in canoes to a “blue hole” - a deep crystal clear brilliant blue waterhole fed by mountain rivers - then swam back downstream to meet our bus.

The next swim, 2.6K from the Luganville foreshore across a channel to Aore, a separate island, was more challenging than the Vila swim, however the weather was kind and predicted strong currents didn’t seem to create problems for most swimmers.

Water cover was provided by a fleet of traditional outrigger canoes, which had done an exhibition race the day before.

A memorable feature of the swim was the large cohort of local swimmers – around 30 including 5 or 6 women tackling the course.

Self taught, in boardshorts or jocks, without goggles unless they were able to get hold of a 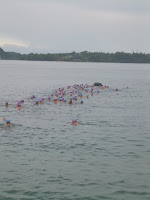 donated pair, and with no preparation, most managed to finish, some completely spent by the finish line.

Other highlights included an entertaining traditional welcome dance before the swim, loud and humorous and a fine awards lunch on

Of our group, Jeanette distinguished herself by winning the 60 – 65 category in both swims, a terrific achievement, as the standard was high.

All were happy with their swims, and could not have asked for a better experience.

We didn’t get around to visiting a kava bar....that, together with lots of other adventures, remain for a return visit.

Pacific Swims did an excellent job organising the trip and made a genuine effort to give something back to the local community as well as providing a memorable and great value experience for swimmers. Check them out yourselves at www.pacificswims.com.

One suggestion for future swims – in the spirit of east-coast open water swims – leave your high tech swim suits at home. They are not necessary in 24C degree water, and don’t fit with the spirit of competition which the local swimmers epitomise.